Be diligent to present yourself approved to God as a workman who does not need to be ashamed, accurately handling the word of truth.
2 Timothy 2:15

I am baffled, amused, and dismayed by the polemics surrounding the King James translation of the Bible. Published in 1611 its 500th anniversary was celebrated last year. I find myself astonished at the tenor of some extreme views of this venerable version. That there can be reasoning individuals believing there is no other legitimate Bible to use that the Authorized Version is astounding.

It can’t be denied that if no other translation of the Word of God is available to you that the use of the KJV can be appreciated. An honorable group of individuals are responsible for crafting a translation, which for its time, was an improvement over the then vernacular edition, the Geneva Bible, on which the KJV was based. The history of its beginning in the first years of the 17th century makes fascinating reading, how the newly installed King of England in 1604, James I, facilitated its development. It is not that there was lacking a version of the Bible in the English language, but the Puritans wanted an updated version that was not so much influenced by Catholic beliefs.

Moving forward 500 years, the English language has changed much from that of Puritan England. Spelling, word usage, and syntax has changed dramatically. It takes a great deal of effort today to read from the pages of the original publication of 1611. 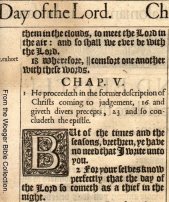 And that brings us to the two main reasons for desiring a new translation of the Scriptures. The exercise of reading has one objective, to understand the presented text. It is of very little profit to read something and not understand it. Accuracy and readability are fundamental objective of the science of translation. The translation team hopes the results of their work will reveal the intended meaning of the original author. They strive to piece together all known fragments of the text to arrive as close as possible to the text precisely as penned. The school of Textual Criticism is devoted to this very question. The reward of delving into the world of textual criticism is the comfort of certainty that the parchments, fragments, and ancient copies of Scripture lead us as close to those originals as we will ever get.

But there are those who have taken the veneration of the “Authorized” version to the extreme. There is a “KJV Only” camp and there is a “1611 version KJV Only” camp, and they ferociously maintain their position. They are diehard fans of the KJV who honestly believe this version is the only accurate version and condemn the use and users of any other. And the sub-camp actually claims that only the text published in 1611 is the sole legitimate version. Just do a Google search on King James Bible defended and you will be amazed at the proliferation of this view. As one web site states, “As Bible-believing Christians, we believe that the words of the King James Authorized Version are the pure and preserved words of God for the English speaking people.” Another claims “The Holy Spirit came to the defense of the KJV … We have uncovered this historic truth: Jesus protected the text of the KJV!”

It can hardly be denied that ANY translation of the Bible has its imperfections and that there are degrees of accuracy of translation and of readability between versions. But they are at best translations of the original documents. And even the originals are not things to be substituted for the living God, idolatry is condemned in all its forms. It is not the translations and copies of the original books of the Bible that are to be worshiped, it is solely the living Word that demands our adoration. Even a cursory reading of the Old Testament reveals that it is one’s living relationship with God that is paramount, not the blind fulfilling of rites and ceremonies. (See Micah 6:7-8) It is righteous behavior that God requires, not reverence by rote. So it is puzzling that there are those whose priority in reading and studying God’s word is adhering to a particular translation rather than comprehending His Word as fully as possible.

I can’t help but think that it is a Believer’s objective, even responsibility, to read from the most accurate and readable translation of the Bible as one can afford and acquire. And these days there are many versions that fill that bill in the English vernacular. Indeed, there are versions to be avoided, such as those that come from such sectarian groups like the Mormon Church, and Jehovah’s Witnesses (The New World Translation), whose translations are oriented and influenced by errors in their theology and understanding who Jesus Christ really is. Though even in these relatively inaccurate translation God can reach the human heart if it is so inclined.

The point it that one who has been born again to a new life in Christ, who is chosen by grace into a personal relationship of the living God should naturally crave the most deep and fulfilling comprehension of this God who is there and is not silent. How can such a child of God not want to understand everything that has been revealed about Him? And nowhere else has He shared with His creation the deep things of God. Evidence of God and His power and nature are certainly shown through the creation (Romans 1:20) but it is only through the word of the Gospel that the path of salvation lies. And we are compelled to accurately handle that word.